off
Order your Agawasie Day T-Shirt 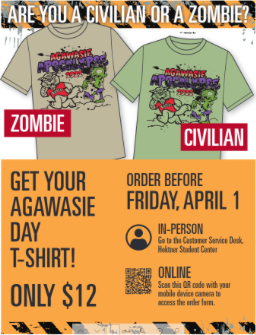 Must have NDSCS Student ID, guests must be accompanied by an NDSCS student. No re-entry permitted.

Students, employees and community members should not attend if they were exposed to someone with COVID-19, they have symptoms consistent with COVID-19, or they have been identified by a state health department official that they were in close contact with someone who had COVID-19.

Why is it called Agawasie Day?

In 1914, the School of Science published its first yearbook called the Agawasie.

According to the authors of NDSCS: 100 Years of Excellence, the origin of this name is obscure, but in an early issue of the annual it was explained as an Indian word for science.

Another story tells that two wily students, Max Lauder and Arnold Forbes, had neglected to actually research the real Indian word for science. In order to cover up their blunder, they contrived the word Aggy-Wassy, which later became the easier form Agawasie.

After publishing the Agawasie for three years, it was discontinued from 1917 through 1920 due to World War I. In 1943 and 1944 the yearbook was reduced in size and printed as a softcover instead of the more usual hardcover edition.

Financing the annual varied from the sale of candy, proceeds from the Penny Carnival, student activity fees, the nominal sales price and solicited advertisements. The arrival of the annual became a day for celebration, so the annual Agawasie Day Picnic was started.

Publishing an annual yearbook was discontinued in 2004, but the day for celebration still continues as Agawasie Day.

*This information was compiled from the College Archives at the Mildred Johnson Library.