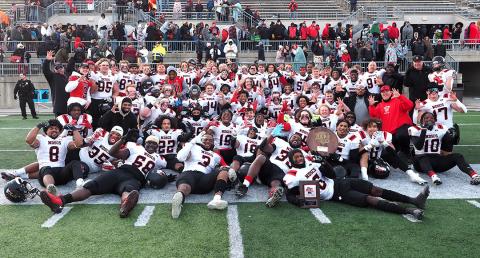 Go Wildcats! The NJCAA has officially announced that the NDSCS Wildcat football team will be traveling to Glen Ellyn, Illinois to play the College of DuPage in the DIII National Championship game on Saturday, December 3. NDSCS finished off the season with a 9-1 record and is ranked #1 in the division. The last time NDSCS participated in a bowl game was in 2005.

The NDSCS Alumni Foundation is organizing a Pep Rally Send-off for the team on Wednesday, November 30 at 7:30 p.m. in the Clair T. Blikre Activities Center, Wahpeton, N.D. The entire Wildcat community is invited to join NDSCS in celebrating the team’s accomplishments and hearing from some of the coaches and players. The team bus will leave early in the morning on Thursday, December 1 with a parade escort out of town.

Coach Issendorf invites all Wildcat fans that are attending the game to join them Friday, December 2 to welcome the players onto the field and watch the team practice. On Saturday, December 3, fans are invited to participate in tailgating celebrations until the game starts at 12 p.m.

Wildcat fans cheering from home are invited to attend a watch party at NDSCS in the Harry Stern and Ella Stern Cultural Center on Saturday — watch for details at NDSCSalumni.com.

Article written by NDSCS and submitted to external news outlets.

Tickets for the Championship game are available now at www.atthemac.org. Purchasing tickets in advance of the game is highly recommended to save time upon arrival to the stadium.
Tickets will also be available for purchase on game day at the stadium - cash sales only.