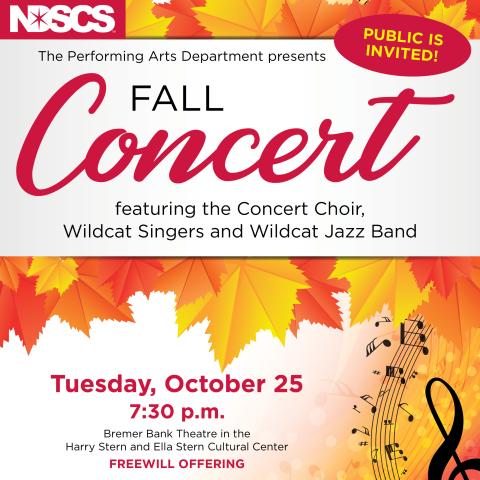 The NDSCS Performing Arts Department will present its first concert of the season on Tuesday, October 25, 2022 at 7:30 p.m. in the Bremer Bank Theatre in the Harry Stern and Ella Stern Cultural Center on the NDSCS campus in Wahpeton.

The concert will feature performances by the NDSCS Concert Choir, Jazz Band, and Wildcat Singers. “We are excited to perform the most eclectic concert of the season,” says program coordinator and choral director, Bryan Poyzer. The audience will hear traditional choral, country, pop, Broadway, and even some hard rock. Dr. Adam Hollingsworth will be directing the Jazz Band, which will also continue with its tradition of genre-breaking literature.

The concert is free and open to the public. Free-will donations will be accepted. Learn more about NDSCS Performing Arts at NDSCS.edu/Performing-Arts.