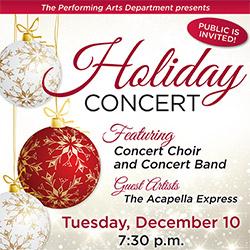 The NDSCS Performing Arts Department will present its Holiday Concert on Tuesday, December 10, 2019 at 7:30 p.m. in the Bremer Bank Theatre in the Harry Stern and Ella Stern Cultural Center on the NDSCS campus in Wahpeton.

The concert is free and open to the public. A reception following the concert will be held in the lobby of the Harry Stern and Ella Stern Cultural Center.